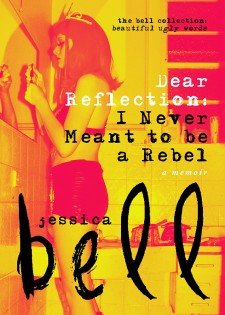 Dear Reflection: I Never Meant to be a Rebel by Jessica Bell

Growing up Rock and Roll and Off the Rails

Jessica Bell never meant to be a rebel. But growing up with two gothic rockers as parents seemed to make it inevitable.

In 1980s Australia, Erika Bach and Demetri Vlass founded Ape the Cry and Hard Candy, two of Melbourne’s iconic indie bands. They encouraged Jessica with unreserved love to pick up the guitar and write her own songs. But Erika’s back problem became a nightmare of pill popping, alcohol abuse, and anxiety attacks. Demetri retreated into silence for fear of triggering Erika’s drug-induced psychosis. And Jessica turned inwards, to her own reflection.

But her mirror self was a fiend, not a friend. All it took was one secret drink at fifteen, and Jessica dove headlong into depression and self-destruction to escape the madness at home.

Jessica Bell is an Australian award-winning author, graphic designer and the singer of the ambient pop band Keep Shelly in Athens. She is also the Co-Founder and Publisher of Vine Leaves Press. Jessica’s previous books include White Lady, Twisted Velvet Chains and Bitter Like Orange Peel and she currently lives in Greece.

Get notified about new releases.

Sign up for email updates from Cameron Publicity and Marketing.